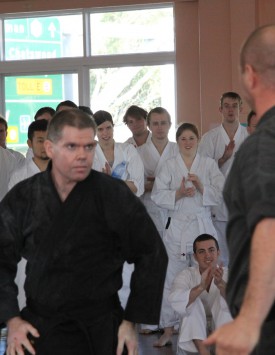 Stephen Renton is the owner and founder of WestStar Martial Arts in Perth. Stephen is a 3rd degree Northstar Ju Jitsu Black Belt with many years of experience in several martial arts, including more than a decade of training personally with Andrew Dickinson, the founder of Northstar Ju Jitsu. Stephen has also trained in Boxing, Kickboxing, Muay Thai, Kali, and the Russian martial art of Systema.

“‘Training at WestStar is more than just an intense physical workout, it’s a workout for the mind and the spirit. What sets WestStar apart is that the work continues outside the dojo. Making a conscious effort to use simple lessons such as stillness, presence, balance, and awareness can have an enormous impact on your own personal and professional development. Just as important though, it’s an awesome self defence system that just works!‘”